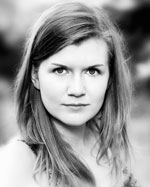 Amy Balmforth will be appearing at the Cheltenham Playhouse in Tom's Midnight Garden this Christmas, and is currently filming Intergalactic, the new sci-fi show from Sky One.