Hosted by the Performance Research Cluster at Manchester School of Theatre, Bunker Talks invite artists and staff at Manchester School of Art to talk about who they are and what they do. A space for critical encounters, presentations, provocation and dialogue, Bunker Talks are linked by a line of enquiry into geo-political, ecological or economic concerns. In the Covid-19 crisis, they have moved online to explore how artists and researchers continue to make and share their work.

Jess Latowicki (Made in China) 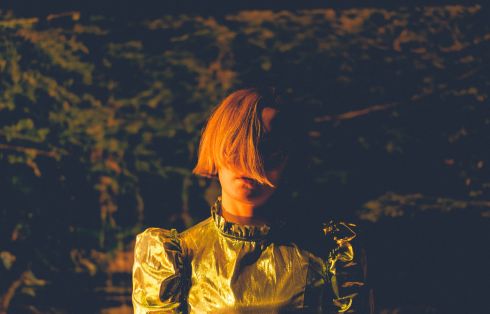 Jess Latowicki (Made in China) gave an artist talk about the theatre company's work and reflected on the themes of its current touring performance. Jess Latowicki studied Acting at NYU before moving to the UK and setting up acclaimed theatre company, Made in China, with Tim Cowbury. Their latest show, Super Duper Close Up explores expectations of social media and IRL pressure. Super Duper Close Up visited the Royal Exchange Theatre as part of its Spring 2020 tour.

Michael Pinchbeck interviews Dr Anna Macdonald, Senior Lecturer at Manchester School of Theatre, about her recent practice as research. Anna is a dance and moving-image artist who uses the medium of the body as a way of exploring philosophical concepts. Her work predominantly takes the form of film, but also involves site-specific performance and installation, and is exhibited in galleries and video art festivals. Anna is programme leader for the new MA/MFA Contemporary Performance starting in 2020/21.

Michael Pinchbeck interviews Dr Kai Syng Tan, Senior Lecturer at the Department of Art & Performance, having joined Manchester Met University in September 2019. Kai is Programme leader for a new MA/MFA in Executive Arts Leadership. An artist, consultant, curator and academic, Kai is concerned with the body and mind in motion in a world in motion and commotion. She is best known for gathering diverse and divergent bodies and bodies of knowledge to engineer spaces of ‘productive antagonisms’ (Latham & Tan 2016) across disciplinary, geopolitical and cultural boundaries, in what she calls an ‘ill-disciplined’ approach (Tan & Asherson 2018).

Michael Pinchbeck interviews John Deeney, programme leader for MA Directing in Manchester School of Theatre. His research interests include Contemporary drama, Directing practice (Drama/Theatre), Dramaturgy/playwriting, Theatre, theory, Politics and he has published several books and articles on theatre and directs a range of different productions. He recently led on a project with Manchester School of Theatre collaborating with the Regional Theatre Young Directors Scheme (RTYDS) on New Directions, a pilot training and career development event for emerging theatre directors from underrepresented communities. Workshops were delivered by industry professionals from across the UK. MA Directing will start in 2021/22.

Josh Edelman interviews Kevin Egan, Senior Lecturer in Drama and Contemporary Performance at Manchester School of Theatre. Kevin is an artist with the theatre company Reckless Sleepers, with whom he has devised and performed in a number of theatre projects, including Schrödinger, Negative Space and It’s Hot, It’s Not. As a theatre-maker, performer and dramaturg he has worked with Plane Performance, Proto-type Theater, and The Strange Names Collective. His research interests are broadly situated within the domain of live art and contemporary theatre, particularly with regard to current trends in theatrical composition.

Michael Pinchbeck from Manchester School of Theatre interviews Dr Brigid McLeer, Senior Lecturer in Fine Art at Manchester Metropolitan University. Brigid is an Irish artist based in London. She trained in Fine Art at NCAD, Dublin, University of Ulster, Belfast and Slade School of Art, London. Brigid is interested in ideas around contingent subjectivity and the public-political and works in various media/modes including video, durational performance (live and to camera), photography, drawing and writing. Her work has been shown in galleries, public sites, as online projects and on the page. She has recently completed a PhD by practice in Fine Art at the Royal College of Art, London.

Michael Pinchbeck interviews Professor Tim Brennan, an independent artist and academic. He has exhibited internationally for over 30 years, including the Venice Biennale, Interzone Performance Biennale in Quebec and The British Museum. He has published extensively with over 15 monograph publications. In 2007, he was shortlisted for the UK's Northern Arts Prize. In the 1990s he established BA Visual Performance at the Dartington College of Arts and then MA Curating at Goldsmiths. Since 2000, he has developed, taught and led new programmes as a Lecturer, Head of Department, as Associate Dean at the University of Sunderland and as Professor of Art at the College of Creative Arts, Massey University, New Zealand. He took up role of Professor of Art and Head of Department of Art & Performance at Manchester Metropolitan University in 2017.

Michael Pinchbeck interviews César Cornejo, Senior Lecturer in Fine Art at Manchester School of Art. Originally from Peru, he creates work that reflects critically on socio-political issues and explores the relationship between art, architecture and society. He has exhibited widely internationally. César received MA and PhD degrees in sculpture from the Tokyo University of the Arts and BA Architecture and Urbanism at the Ricardo Palma University in Lima, Peru. He has taught at institutions such as the University of South Florida, the City University of New York, Museo del Barrio NY, Massachusetts College of Art and Design and Ricardo Palma University.

Michael Pinchbeck interviews Patrick Campbell, Senior Lecturer in Drama and Contemporary Performance at Manchester School of Art, and other members of Cross Pollination (CP). Founded in 2018 by Marije Nie and Adriana La Selva, CP is an international research-based performance platform on the dialogue in-between practices, where practitioners and researchers work together on the transformation and generation of knowledge. Marije and Adriana have set up the Parliament of Practices, an international network online forming an ecology of research and practices. CP have started the Quarantine Sessions - creative Zoom sessions generating scenic material for the development of future performances. CP members Dr Andrea Maciel and Dr Alex Boyd, trustees of Intercultural Roots for Traditional Embodied Arts / Public Health, have developed online classes as a part of their National Lottery-funded Health & WELLth: Get Active Online series. 1001 Fires is a day of solidarity and connection with artists and makers across the globe

Dr Anna Macdonald (MA/MFA Contemporary Performance Programme Leader) interviews Dr Jenny Baines (Senior Lecturer in Filmmaking). Jenny Baines is an artist working predominantly with 16mm film. The apparatus of analogue film play an integral part in the production and display of her performative works. She uses the wind-up mechanism of the bolex camera as a timer for which she performs repeated, often absurd actions, pushing the limitations of this mechanism and her own physical endurance. Her recent looped and double-screen films explore the out-of-frame as a space of potential and site of affect, where the action witnessed in the image is suggested to continue beyond its limits. Jenny exhibits her work internationally in both screenings and exhibitions including London Short Film Festival, ICA; Urban Screens, Bergen; Norwegian Film Institute, Oslo; 10th International Istanbul Biennial, and Copenhagen Film Festival.

Kevin Egan (Senior Lecturer in Drama & Contemporary Performance) interviews Michael Pinchbeck (Reader in Theatre at Manchester School of Theatre). Michael is a writer, director and theatre maker. He was commissioned by Nottingham Playhouse to write The White Album (2006), The Ashes (2011) and Bolero (2014), premiering at Nottingham Playhouse before touring Bosnia & Herzegovina and Kosovo supported by the British Council. His work has been selected for the British Council’s Edinburgh Showcase. He recently co-edited Staging Loss: Performance as Commemoration for Palgrave Macmillan and Acts of Dramaturgy: The Shakespeare Trilogy for Intellect.

Michael Pinchbeck Reader in Theatre, interviews Andrew Hunt, a curator and writer based in London and Manchester, and Professor of Fine Art and Curating in the Manchester School of Art. Between 2016 and 2017, he founded and directed the contemporary art festival Reading International. From 2008 to 2014, he was Director of Focal Point Gallery (FPG) in Southend-on-Sea. Since the early 2000s, he has worked on intimate solo exhibitions with significant international artists and designers on projects that range from minor printed ephemera to major publications, exhibition design and new branding for art institutions. In 2012 he was a member of the Turner Prize jury. He has contributed to magazines and journals such as Artforum, Art Monthly, The Burlington Magazine, Domus, frieze, Mousse Magazine, Picpus and TATE ETC., and is founding editor of the Slimvolume imprint, which has published editions and books.

Michael Pinchbeck Reader in Theatre, interviews Dr Gulsen Bal. Gulsen joined Manchester School of Art as Senior Lecturer in Curating (Art Theory & Practice) in 2020. She previously held the position of Visiting Research Fellow at Manchester School of Art working in Contextual Practice, in curating with her main focus on the Department of Art & Performance's Art Theory and Practice programmes (Curating, Art History, Fine Art, Contemporary Curating) between 2019 to 2020. Gulsen is a leading international curator having organised many exhibitions, biennales and events. She is the director of Open Space, an international art organisation that brings diverse creative practice together. She is an editor of Third Text scholarly journal and has published numerous books, articles and texts.