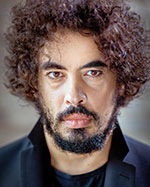 Many congratulations to Ali Gadema who will be joining the Royal Shakespeare Company for their Winter Season at the Swan in Stratford-on-Avon, appearing in both King John and A Museum in Baghdad.