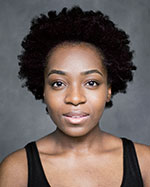 Keep a good look out for Yasmin Mwanza with voice roles in both DYING LIGHT 2: STAY HUMAN and EXPEDITIONS: ROME.

Yasmin will be appearing as Fidda in Enlightened Kingdom's THE LADY OF HEAVEN, a historical drama film directed by Eli King. She has also recently appeared as Georgina Lawrence in ITV's STEPHEN.

Yasmin is currently in Our Lady of Kibeho directed by the artistic director James Dacre at the Royal and Derngate in Northampton. In March, Yasmin can be seen in Episode 2 of Hanna, a new TV series written by David Farr for Amazon Prime and NBC Universal. And in July Yasmin can be seen in Spider-Man Far From Home by Marvel Studios, Sony & Columbia Pictures!