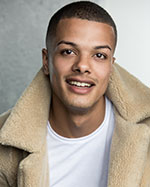 Dylan Brady is currently filming in THE DIPLOMAT (World Productions / Alibi) in Barcelona playing Carl. He recently finished RALPH AND KATIE (BBC 1) playing Danny and his episode of THE FUCKIT BUCKET (Netflix) is currently shooting in London.

Dylan is appearing as Sam in Netflix's THE A LIST .

Dylan will be joining the cast of Coronation Street as new character Danny Tomlinson. He will also be appearing as Ed in the BBC drama series Get Even.