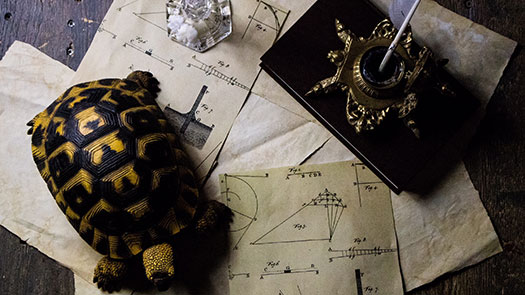 In a large country house in Derbyshire in April 1809 sit Lady Thomasina Coverly, aged thirteen, and her tutor, Septimus Hodge. Through the window may be seen some of the 500 acres inclusive of lake where Capability Browns idealized landscape is about to give way to the picturesque Gothic style: everything but vampires, as garden historian Hannah Jarvis remarks to Bernard Nightingale when they stand in the same room 180 years later.

Tom Stoppards absorbing play takes us back and forth between the centuries and explores the nature of truth and time, the difference between the Classical and the Romantic temperament, and the disruptive influence of sex on our orbits in life  the attraction which Newton left out.

There probably isn't a more dazzlingly cerebral play of the last 50 years than Tom Stoppard's 1993 masterpiece. Its spry apothegms come as thick and fast as its ideas, but if there's a single line to be seized on in this showit's the realisation that "it's wanting to know that makes us matter". More interesting and important than knowledge itself, Stoppard suggests, is the desire for knowledge  The Guardian