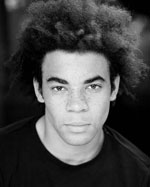 Ashley Gerlach is currently playing Roger Shears in the acclaimed national theatre production of CURIOUS INCIDENT OF THE DOG IN THE NIGHT-TIME on its 10th anniversary tour, traveling all around the UK.

Ashley has recently been playing Pete in Hope Theatre's production of FEVER PITCH.