By Friedrich Schiller, Adapted by by David Harrower
Directed by David Shirley

'One of European theatre's major plays, Schiller's masterpiece hinges on a brilliantly imagined meeting between Mary, Queen of Scots - a focus for simmering Catholic dissent and her cousin Elizabeth, Queen of England, who has imprisoned her. Isolated by their duplicitous male courtiers, the women collide headlong, each wrestling with the rank, ambition and destiny their births have bestowed, against a thrilling background of intrigue, plot and counter-plot.' 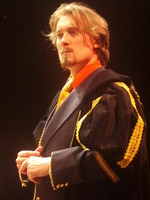