Fear and Misery of the Third Reich

Probably the most naturalistic of Brecht's plays, Fear and Misery of the Third Reich offers a series of vignettes that allow for a glimpse into the harsh realities of life in Nazi Germany during the 1930s. Neatly woven so as to create a multi-faceted whole, the play captures the sense of paranoia, deception, fear and betrayal that came to characterize one of the most challenging periods in 20th Century European History. 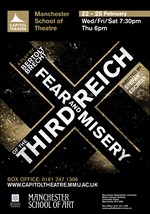