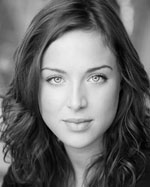 Congratulations to Lowenna Melrose who was recently seen in The Philanthropist directed by Simon Callow at the Trafalgar Studios.