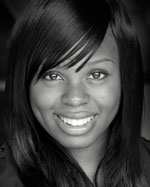 Helen is currently appearing in the stage production of Harry Potter and the Cursed Child.

Helen is appearing at Stratford East in 'Beauty and the Beast' as Belle as their Christmas show.