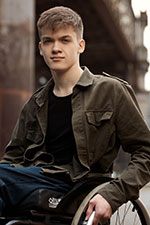 Zak Ford-Williams is to feature in new BBC One crime drama BETTER coming out next year, Zak plays the character Owen.

Zak is appearing as Tyler in Sky's WOLFE with Babou Ceesay and is playing Young Jacob Marley and Tiny Tim in The Nottingham Playhouse's upcoming production of A CHRISTMAS CAROL, which will also be moving to London in December.

I act both in and out of my wheelchair.