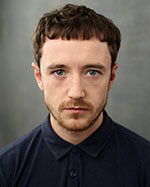 Tommy Garside appears in the new TV series THE RISING (SKY) and is currently working on THE METHODISTS where he plays the character Daz.