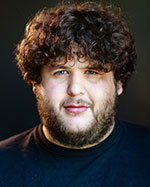 Sam Black will be appearing as Randall in the new EXPENDABLES 4 film, directed by Scott Waugh. Sam will also returning to CYRANO DE BERGERAC at the Harold Pinter Theatre in January 2022. The show will then run at the Brooklyn Academy of Music in New York.

Congratulations to Sam who has just been cast in Martin Crimp's new version of Cyrano De Bergerac at the Playhouse Theatre with the Jamie Lloyd company and starring James McAvoy.