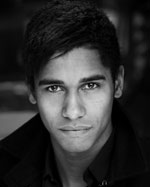 Make sure to catch Elliot Knight in the new horror thriller YOUR LUCKY DAY, keep your eyes peeled because its coming soon.

Elliot will be appearing as Rizal in the film JUMP OUT from Silent D Pictures.

Elliot can be seen in TV Movie 'Happy Accident' starring Vanessa Williams, directed by Kat Coiro. Elliot also stars in Feature Film 'Color Out of Space' starring Nicolas Cage, playing the role of Bret and appears also as Aiden Walker in award winning series 'How To Get Away With Murder', starring Viola Davis.

Elliot will soon be seen in the new movie, THE COLOR OUT OF SPACE (alongside Nicholas Cage and Joely Richardson) and has been working on CALL OF DUTY: MODERN WARFARE (role to be announced) which is due for release on October 25th, 2019. Elliot was recently seen guest-starring as Billy Novak in the popular DC Comic action series TITANS on DC Universe and his recent series LIFE SENTENCE (CW) is currently showing on Netflix which saw him as regular character Wes alongside Lucy Hale. Previous regular roles include Brady Ross in the 13-part series AMERICAN GOTHIC for CBS and six -part BBC series BY ANY MEANS.