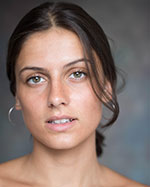 Congratulations to Caitlin Kaur who plays Diane Green in the BBC series SISTER BONIFACE MYSTERIES, in the episode Crimes and Miss Demeanors. Caitlin is currently performing in CALVINO NIGHTS at the Minack Theatre from 1-19th May. Directed by Mike Shepherd, his first show since Kneehigh.