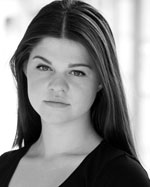 Congratulations to Caitlin Drabble who will be appearing as Carly in Season 3 of 'Sex Education'. You can also see Caitlin as Margaret Fairfax in 'Miss Scarlett and the Duke' starring Kate Phillips on SkyTV/Amazon Prime.

Caitlin will be appearing as Margaret Fairfax in Miss Scarlett and the Duke.

Caitlin has played Ruby Jewel in the BBC's Father Brown