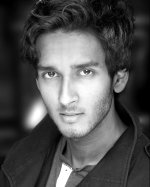 Assad Zaman is set to play Rashid in the new AMC seven-episode series INTERVIEW WITH THE VAMPIRE, adaptated from Anne Rices book.

Assad is appearing as Anish Sengupta in HOTEL PORTOFINO with Anna Chancellor, an Eagle Eye Drama for PBS/ITV1.

Congratulations to Assad who is currently playing Florizel in 'A Winters Tale' directed by Erica Whyman alongside Pericles, for director Blanche McIntyre in the current RSC Season at Stratford-Upon-Avon. Both productions can be seen later in the year at the Barbican in London. Assad features also as Asif in award winning BBC/ Amazon Prime Drama 'Small Axe', starring John Boyega

Assad is currently on tour with ETCT's stunning production of 'The Funeral Director' by Iman Quereshi.

Assad will soon be appearing in the next series of Vera on ITV and can currently be seen in the role of Millat Iqbal in 'White Teeth' at the newly refurbished Kiln Theatre.

Congratulations to Assad for his role as Sathnam in Apple Tree Yard and in Coriolanus and Salome at the RSC.