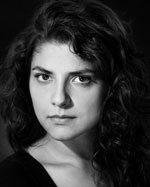 Watch out for Zora Bishop as she plays Anoushka Shah in the TV series THE BAY. She also landed herself a role in the well-known BBC series DOCTORS as Sergeant Gemma Ramjee.

Zora has recently been seen as Nasrin in ANGELA BLACK and as Sabeen Habeeb in CORONATION STREET.

Zora is about to play Martin Freeman's Wife in 'The Eichmann Show' for the BBC.