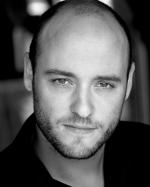 Neal Craig will be appearing as Claudius in Hamlet at The Watermill Newbury. Recently Neal played Katherine in Henry V for Propeller and was directed by Tom Morris in Swallows and Amazons.