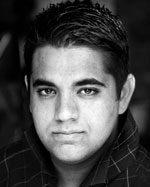 George will be playing Leon in series two of Flack and as Gareth Wyatt in Vera.

Congratulations to George for his excellent portrayal of Jonj in Russell T Davies' 'Years and Years' with Emma Thompson and Rory Kinnear. George has also recently appeared in 'Warren' with Martin Clunes.

George can be seen on TV in 'Ordinary Lives' playing Jason. Before that George was in Russell T Davies 'Banana' playing Jonjo and in 'Happy Valley'.