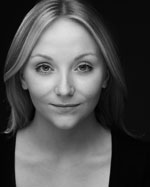 Alice May Feetham has recently appeared as Deborah in I AM (Channel 4) with Gemma Chan and Vicky McClure and as Beth in BOILING POINT (Ascendant Films) with Stephen Graham.

Alice May will be appearing as Beth in feature film 'Boiling Point', starring Stephen Grahame and Jason Flemyng, which will be released later this year. Alice also stars as Bernie in SkyTV Series 'Save me', starring Suranne Jones and Lennie James.

Following on from her successes in Channel 4's No Offence and BBC's 'In the Dark' Alice is currently a regular in Sky Atlantic's 'Save Me' with Lennie James, Stephen Graham and Suranne Jones. Alice is currently filming Bancroft 2 for ITV.

Alice is playing Bernie in all 6 episodes of Save Me currently running on Sky Atlantic.