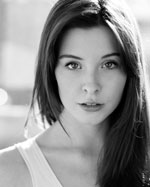 Congratulations to Alexa Morden whose narration of the audio book HIDDEN DEPTHS by Araminta Hall is currently available. Morden writes “it is an incredible insight into women's lives at the time and highlights issues that we are unfortunately still having to deal with today.”

Alexa is playing Margaret in THE WAR BELOW, a film from Vital Pictures.

Congratulations to Alexa for her role as Bianca in Beautiful Devils

Alexa plays Jenny in Standby, which has been nominated for Best British Short Film by BAFTA