Set in mid-14th Century France at the height of the Great Plague, Red Noses is the story of Flote, a Catholic monk, who seeks a heavenly sign to show him the way to serve God's will and ease man's suffering. Following an incident in which he accidentally makes people laugh, Flote believes he has received the sign he has long awaited and so embarks on a journey to spread laughter and joy to all whom he encounters.

'Red Noses is a letter from a transfigured world, much like ours, where statues come to life and human beings turn to stone. It's a letter wishing you good thoughts, but chiefly, good feelings.'  Peter Barnes 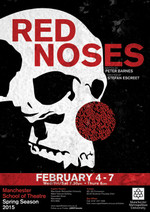