Manchester School of Theatre / Productions / Past / Ring Around the Moon (2002)

Ring Around the Moon

Christopher Fry calls this play "A Charade with Music" in which the characters play and dance under the twinkling lights of a winter garden. The same actor plays the twins Hugo and Frederic. Frederic is diffident, Hugo is fascinating and heartless. It is Hugo who sets the charade in motion. He deprecates his brother's love for Diana Messerschmann, who treats him like a dog, and he has Isabelle, a ballet dancer, come to the ball that evening, intending that she should make Frederic fall in love with her. 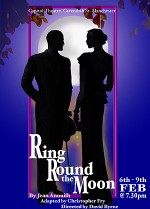