Manchester School of Theatre / Productions / Past / Attempts On Her Life (2002)

Attempts On Her Life

Is Anne the object of violence?
Or its terrifying practitioner?

The sub-title for this play is "Sixteen Scenarios for the Theatre". It is a slice of theatre which takes fragments from life and slowly pieces them together. Each fragment is apparently enclosed, but they evoke a world of power and fear. 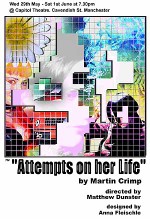 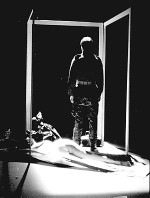