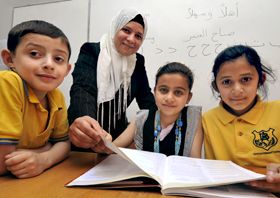 A UNIVERSITY project which will introduce 1,000 children to community languages has been launched by MMU's Vice Chancellor John Brooks and Manchester City Councillor Afzal Khan.

Children from Greater Manchester will get taster sessions in Urdu, Mandarin, Arabic - the most common tongues in the city after English, and Italian, under the project which responds to a drop in uptake of 'traditional' foreign languages at GCSE and A level.

"The aim is to break down barriers between Modern Foreign Languages and Community Languages by encouraging all schoolchildren to study a range of languages," says Dr Sharon Handley, Head of MMU's Department of Languages.

MMU and the Universities of Salford, Bolton, Manchester and UCLAN at Preston have teamed up with Manchester City Council and local supplementary and mainstream schools for the Community and Lesser-Taught Languages Project.

Levenshulme High, which already offers Urdu and Arabic, is one of the first schools to sign up. Director of the Language College at Levenshulme, Marie O'Sullivan said: "Many of our pupils already have extensive knowledge of a language other than English, which they speak with their families. This project builds on these skills as a springboard for employment and further and higher study.

"Encouraging interest in languages is really important because uptake of languages at A-level and university is declining, yet language skills remain highly prized by employers, not only for the linguistic benefits, but also the cultural advantages which speakers of other languages bring to their employment."

The universities will train the dozens of tutors who help out at the city's 40 supplementary or 'Saturday' schools, and coordinate tutors for mainstream schoolchildren. It will also run five Languages Days in the city, each for 200 pupils, offering taster sessions in languages, quizzes, multicultural markets and talks on studying languages at college and university.

Language Days will be held in June and July at one of the four partner universities.

Other schools involved in the first phase include: Walkden High, Xaverian College, Stretford High, William Hulme and about 40 supplementary schools.

The Project was officially launched at MMU on Thursday May 8 by MMU Vice-Chancellor John Brooks and Councillor Afzal Khan, former Lord Mayor of Manchester and city councillor for Cheetham.

It is part of Routes into Languages, an £8 million government-funded programme that aims to encourage the take-up of language courses in England. There are 9 regional consortia (groups of universities in the various regions working together), as well as national networks and research projects. For further information about the programme please go to their website. 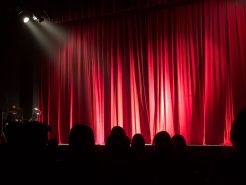