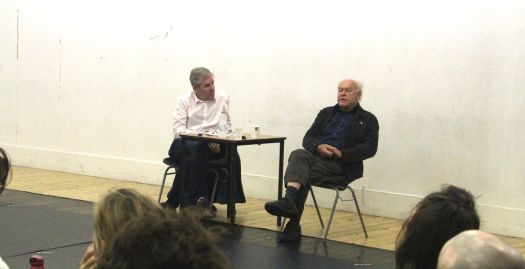 Further established performers are expected to visit throughout the year

Celebrated actor Timothy West visited Manchester School of Theatre this week to share insight gained from six decades in the industry with the next generation of performers.

Renowned for his versatility across stage, screen and radio, West has trod the boards in three seasons with the Royal Shakespeare Company, going on to play Macbeth twice and King Lear four times on stage.

He has appeared on the silver screen in The Day of the Jackal, Cry Freedom and Iris alongside an accomplished television career in shows like Brass and Bleak House, as well as enjoying the rare accolade of portraying characters in both Coronation Street and EastEnders.

He also plays a prominent role behind the scenes, previously co-artistic director at the Old Vic and now president of the London Academy of Music and Dramatic Art.

You just have to keep your eyes open. Don’t be afraid, if you see a play you like, to write letters saying that you really enjoyed the production. You might write 100 letters and get one reply but it’s worth trying.

In a wide-ranging Q&A session with BA (Hons) Acting students, West reflected on his beginnings in repertory theatre, the value of formal training, his frustration at how actors are typecast as only suiting theatre or screen, and how he prepared for performing big roles such as King Lear.

But perhaps the most enlightening part of the session were his impressions of the modern industry and his advice on how to kickstart a fledgling acting career.

He said: “You just have to keep your eyes open. Don’t be afraid, if you see a play you like, to write letters saying that you really enjoyed the production. You might write 100 letters and get one reply but it’s worth trying.”

When aspiring young actors do get a foot in the door, he said they must “get to know people, be nice and be keen”.

But he wasn’t afraid to express his dismay at the increasingly London-centric theatre scene, and a lack of diversity in the arts. “We all have to work to redress that balance”, he told students.

David Shirley, Director of Manchester School of Theatre at Manchester Metropolitan University, said: “'We were delighted to welcome Timothy West to meet and talk with our student actors.

“His vast experience, immense passion and absolute professionalism proved hugely motivating and stimulating for all of us who teach and work in the School.

“In a career spanning over 60 years spent working in all parts of the industry, his insights and guidance were immensely valuable.

“This was a wonderfully informative and entertaining event and marks the beginning of what we are hoping will be a series of similar interviews with established and highly regarded professional practitioners.”