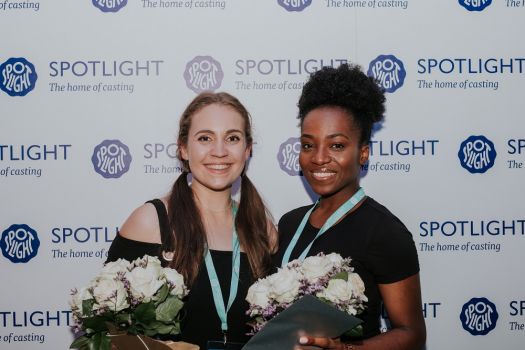 The annual Spotlight Prize is awarded to the best of the next generation in acting talent studying at the UK’s drama schools. Yasmin joins an esteemed list of previous winners including the new star of Doctor Who, Jodie Whittaker, Game of Thrones’ Faye Marsay, and Bessie Carter, who has recently finished filming Howard’s End for the BBC.

Yasmin said: “I feel very blessed. It was an honour to perform in front of so many industry professionals.

"It was nice to win it for Manchester School of Theatre too. We haven’t ever won a Spotlight Prize award before so I hope it will inspire generations to come."

At the final event at The Underglobe in London on Tuesday 11 July, Yasmin’s screen performance of A Profoundly Affectionate Passionate Devotion to Someone was enough to see her walk away with the award and a £2,000 prize.

Cecily Redman from the Royal Academy of Music was awarded Best Stage Actor.

The 20 finalists were selected from tapes submitted by graduate actors from over 70 drama schools across the country.

David Shirley, Director of Manchester School of Theatre at Manchester Metropolitan University, said: “All of the staff and students in the School of Theatre are delighted for Yasmin's success and proud of her achievement. The outcome is a tribute to Yasmin's hard work as well as to the commitment and dedication shown by all of the staff who teach and work in the School. We wish all the very best for the future.”