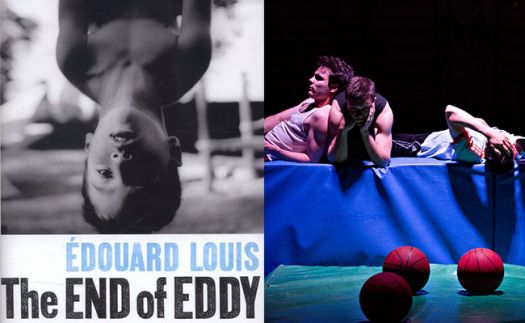 Graduates will perform readings of Edouard Louis' The End of Eddy

Alumni from Manchester School of Theatre's BA (Hons) Acting course are currently rehearsing a series of readings to bring to life Edouard Louis' The End of Eddy at the French Literature Live Festival at Institut Francais.

A group of five alumni are working with French director Richard Brunel on these readings, that will be part of the six-day festival in the heart of London, where they will join a programme of live literature performances, appearences by French-language writers, films and musical encouters.

Daniel Harkin, Ellie Jackson, Elliot Keefe, James Eken and Joseph Jordan all graduated from BA (Hons) Acting in 2016, after undertaking extensive training in acting for stage, screen and radio, and featuring in Manchester School of Theatre productions such as The Art of Success by Nick Dear, Brutopia by Howard Barker and Welcome to Thebes by Moira Buffini.

'I am absolutely thrilled to be taking part in the reading at Institut Francais along with my fellow actors and friends, who I trained with for three years,' commented Joseph Jordan.

'This will be my first live performance in London, which is hugely exciting. I also feel deeply honoured to be a player in such a compelling and emotionally tuned performance, written by the marvellous Edouard Louis.'

The End of Eddy by Edouard Louis is a novel that tells the story of a young homosexual French boy growing up in a French town crushed by misery, alcholism and homophobia.

It took the French literary scene by storm and has recieve worldwide acclaim after been translated into twenty languages, including English by Harvill Secker, whose version will be adapted for the alumni to perform.

Joseph stated that 'the novel is extremely sincere in its portrayal of human conditioning in Western society, making it a very exciting prospect for an actor.

I always seek to find the truth behind my character's words and I only hope to honour Edouard Louis' words as well as possible.'

The readings of The End of Eddy will be performed on the 11 May at 7pm. Find out more about this performance at: http://beyondwordslitfest.co.uk/the-end-of-eddy-by-edouard-louis/