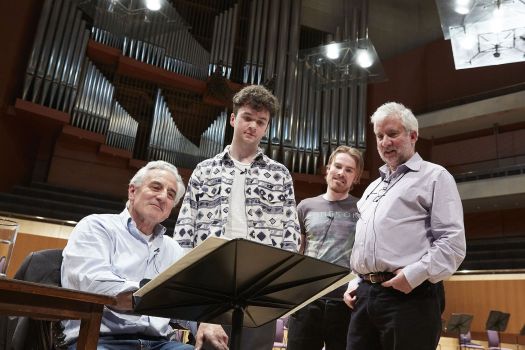 STUDENTS from Manchester School of Theatre are pictured putting the final touches to a performance that will took place as part of the Hallé’s Dvorák season, last weekend.

Students Barney Healy-Smith and Johnny Byrom have been working with the Hallé’s former artistic advisor Gerard McBurney and multi-award-winning actor Henry Goodman on Beyond The Score, a magical combination of acting, film, music and singing that tells the story behind one of classical music’s most iconic scores, Dvorák’s Symphony No.9 ‘From the New World’.

Director of the School of Theatre, David Shirley, who staged the piece, was delighted with the finished product. He said: “This is an extraordinary experience for our third year actors, who are given the opportunity to appear with a World famous Orchestra and play the various personalities who influenced the development of one of the greatest symphonies of the 20th Century.”

The performance was described by audience members on social media as “fantastic”, “brilliant” and “enlightening”.

Johnny Byrom said: “Working with such a prestigious orchestra on such a powerful symphony was an honour. Not only did I gain a better understanding of Dvorák's composition, I also developed a strong connection with the piece.

“I hope we were able to breathe life into Gerard's creation, ensuring that nobody will listen to 'The New World' Symphony in the same way again.

“This was a great opportunity. I have broadened my horizons as a performer out of the realms of theatre and TV, and the experience will no doubt prove invaluable when I graduate.”

Barney Healy-Smith said: “Performing with the Hallé orchestra was a real privilege, considering they're among the best symphonic orchestras in the UK. Beyond the Score was a collaboration between many artistic mediums and being able to bring the three years of my actor training into this project was key to its success.

“I felt huge pride standing on the Bridgewater Hall's stage representing the School of Theatre and the University as my three years are about to come to an end.”