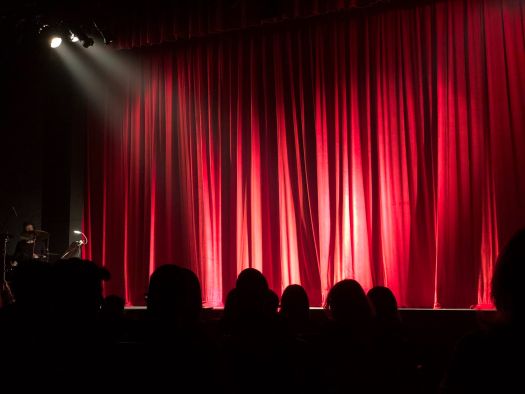 How is the theatre industry responding to the Coronavrius crisis?

As theatre venues across the UK have closed their doors due to Coronavirus (COVID-19), major theatres have turned to broadcasting performances online for people to view at home during the lockdown. Experts from Manchester School of Theatre at Manchester Metropolitan University examine how the theatre industry has responded to the crisis.

How has the theatre industry moved online?

Michael Pinchbeck, Reader in Theatre: Over the last week, I’ve been to Leeds Playhouse to see Imitating the Dog’s Night of the Living Dead: Remix and the National Theatre in London to watch One Man, Two Guvnors. I’ve witnessed an artist, Paul O’Donnell, performing his award-winning one-man musical about Jon Bon Jovi in his parents’ living room.

Of course, all of this has been done online – in our house. At the same time, as a theatre-maker, I’ve released three shows I made in the last ten years for those who may not have seen them.

This is a new way of sharing work because of the current climate and artists and audiences are engaging with theatre in a radical new way.

What’s also changing is how theatre-makers create and disseminate their work via the internet.

With the cancellation of Edinburgh Festival and Edinburgh Fringe, for the first time in over 70 years, we will be experiencing theatre remotely over the summer. We’re keeping our students updated with the latest live performances by posting links on our Manchester School of Theatre Performance Twitter channel.

What’s also changing is how theatre-makers create and disseminate their work via the internet. The British Council has created a list of contemporary performances including work made via social media.

Uncut Theatre has made Bubble, featuring artists who have never met before using Facebook. Actor and director Rob Myles, is using Zoom to stage a different Shakespeare play every week. As they say, the show must go on(line).

Why not try watching something new?

Josh Edelman, Senior Lecturer: Normally, you go to theatres near you and get to know the way they make work. And it’s wonderful when a local theatre becomes a home and hub for its community.

But if you’re stuck at home, why not try a style of theatre that’s radically different from what you know? You might discover something you’ve never thought of before that would be very hard for you to see live with no need for travel, tickets or babysitters.

The Gateshead International Festival of Theatre (GIFT) in May has gone fully digital, the classic New York avant-gardists The Wooster Group are streaming their much-acclaimed Hamlet for free, and the Young Jean Lee Theatre Company, the next generation of American experimentalists, have much of their work streaming on their website.

You might discover something you’ve never thought of before that would be very hard for you to see live with no need for travel, tickets or babysitters.

If you’ve never tried opera, check out the streams available from the Royal Opera House or New York’s Metropolitan Opera. Central and Eastern European theatre, which have a large number of productions in repertory, are opening up their archives. One of my favourites, Berlin’s Schaubühne, is putting a different performance online each day, many of which have English subtitles.

Why should we engage with theatre at home?

David Salter, Programme Leader BA Acting: By our reckoning, many of us will be watching more theatre now than we did before the lockdown. With long days at home, we often spend hours trawling through box sets to entertain ourselves. But watching television can be a passive experience.

When we watch a recording of a live performance, we feel part of an event, even when the event is no longer live. Watching live theatre, it’s not so much happening in front of you as happening to you, and to a bunch of other people too.

And that’s thrilling. Because what we miss right now is being with people. And at a time when this is almost impossible, being in the present moment with several hundred other people doing the same thing is electric.

Josh Edelman, Senior Lecturer: With so much television and cinema available on streaming services, why engage with live theatre? Because it’s not the same.

When you watch work made for the screen, you’re watching something meticulously polished and edited. But theatre, is always a bit rough around the edges and more human.

It can be invigorating to remind yourself how powerful it is to watch another living, breathing human being do something extraordinary.

As audience members, we’re more aware of the work the actors are doing, and the creativity of the performers, directors and designers. It can be invigorating to remind yourself how powerful it is to watch another living, breathing human being do something extraordinary.

Sure, it’s more fun to be in the same room, but in these crazy times, we’ve learned to take what we can.

How important is arts and culture during the lockdown?

Michael Pinchbeck, Reader in Theatre: Culture is important, to our economy and to our wellbeing. Theatre is part of the creative solution to the lockdown and many arts venues, and indeed the BBC, are launching ‘Culture in Quarantine’ projects and programmes to entertain and inform us at home.

HOME in Manchester, who we work closely with, has announced a new programme, Homemakers, featuring local artists responding to the crisis, taking ‘live experiences from the homes of artists into the homes of their audiences’.

It’s important to note that artists and theatres will lose revenue over the coming months and Arts Council England are doing important work to support freelance artists and companies in the current climate.

There have also been fundraising schemes set up in the North West to support artists who now find their future more precarious. Many of the theatre companies streaming work now are asking viewers to pay, for example GIFT Festival are selling tickets for their online work.

The Live Stream Archive allows you to donate to individual theatre companies and The National Theatre are asking for donations when you watch their back catalogue.

Theatre needs to survive in order for it to thrive. 200,000 people watched One Man, Two Guvnors live last week, equivalent to 224 sold-out performances in the National's Lyttelton Theatre, where it was staged originally. 2,047,577 people have now watched it online – so theatre is alive and kicking (if not actually live).

Will we see different performance skills coming to the fore?

David Salter, Programme Leader BA Acting and Graeme Hawley, Acting for Camera Tutor: In many respects creating a character for the stage and for the screen are the same thing. One subtle but major difference, however, is to do with projection.

Vocal projection, along with physical and emotional projection. No matter how small the performance area, we are always projecting.

Yet on screen, we must reduce that projection, allowing the character to exist in the moment, trusting that the audience (the camera) will find us.

Because the camera can get so close to the actor, thought and intention become our greatest asset. If the clarity of thought is there, the camera will see it, giving the audience an experience of inner life that is unique to screen acting.

Anna Macdonald, Programme Leader MA/MFA Contemporary Performance: In these strange times, theatre has shifted from what are traditionally reified spaces, with architectures aimed at separating those who perform from those who don’t, to the everyday spaces of the home.

Yes, we are enjoying online streams of large-scale national treasures, but we are also enjoying people sharing their hidden skills, their first attempts, and improvised collaborations. The Marsh family’s adaptation of Les Misérables, for example, has at time of writing had 3,861,353 views.

Whilst watching experts in performance whose abilities transcend those of ordinary people can be both inspiring and comforting, what these times remind us is that theatre is also a way of celebrating our right to have a go, to not be good at something. It reminds us of our shared vulnerability and our humanity.